People have been carving jack-o’-lanterns for centuries, but not always from pumpkins. The tradition originates from the Irish legend about “Stingy Jack” who cheated the Devil twice and got away with it. According to legend, Stingy Jack asked the Devil to drink with him. True to his appellation, Stingy Jack didn’t want to pay for his beverage, so he convinced the Devil to turn himself into a coin that Jack could use to buy both of their drinks. Once the Devil complied, Jack decided to forgo the drink and keep the money, and, putting it into his pocket next to a silver cross, he prevented the Devil from changing back into his original form. Jack finally released the Devil under the condition that he would leave Jack alone for one year and that, should Jack die, he would not claim his soul. When the Devil returned after a year was up, Jack again tricked him into climbing into a tree for some fruit. While he was up in the tree, Jack carved a cross into the side of the tree so that he could not come down until he promised not to bother Jack for ten more years. 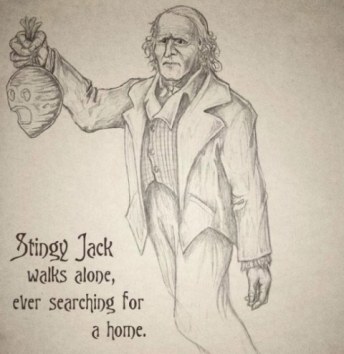 All over the United Kingdom, people began crafting their own versions of Jack’s lantern by carving intimidating faces into turnips, beets or potatoes and placing them into windows and doorways to frighten away Stingy Jack and other wandering evil spirits. Irish, Scottish and English immigrants brought the tradition to America in the 19th century where they discovered that pumpkins, a native fruit was perfect for the task. In today’s era, the best way to carve a pumpkin is to first go with family or friends to pick out the best looking pumpkin in the patch.

1. First, hollow out the pumpkin by cutting a hole in the top around the stem with your keyhole saw or serrated knife. If you plan on using an electric light instead of a candle, cut the hole in the bottom or on the back side so you can hide the cord.

2. Use a big spoon, plastic scraper or

fleshing tool to scoop out all of the flesh, seeds and pulp. Instead of just throwing it away, look up recipes on roasted pumpkin seeds, pumpkin puree, pumpkin butter and more!

3. Grab your printed pumpkin design (there are plenty of options online), or an artistic friend. 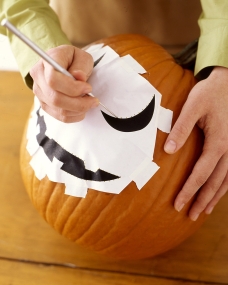 Get creative! While the toothy, jack-o’-lantern grin is a classic, don’t be afraid to branch out into other fun designs and faces. To transfer a design onto the pumpkin, affix it to the pumpkin and trace the design by poking holes with a sharp awl, needle tool, or even a thumb tack. If you have an artist friend, have them draw it directly on the pumpkin with a sharpie… just make sure that all of the positive space connects!

4. Remove the paper and carve along the pattern with a miniature saw or linoleum carving tool.

You can also use a drill with a 1/2-inch or 3/4-inch spade bit if you want to make holes in the pumpkin for eyes, or if you are going for a polka-dot design!

5. Lastly, wait for dark and then light your pumpkin! If using a votive candle, put it in a high-sided glass, and never leave it unattended. It is recommended to either cut a hole in the back of the pumpkin for ventilation or leave the top off.

Battery-operated candles are another good alternative, or you can wrap a strand of 20 or so white lights around a glass jar. Secure the wires with tape, cut a hole in the hollowed-out pumpkin for the cord and place jar inside. Just remember to unplug lights before going to sleep.