A new story about the old textile mill era 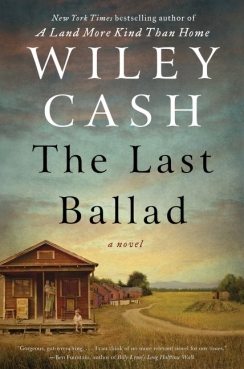 From 1899 to 1996, cotton goods were in production at Olympia Mill in Columbia, one of four cotton mills in Columbia. At one time, it was the largest cotton mill in the world under one roof.

The South was home to dozens of cotton mills before cheaper labor and resources became readily available outside the United States. Many small but once-thriving towns throughout southeastern states eventually quieted, or became forsaken vestiges. While the mill town flourished, so did a distinct way of life and culture. Wilmington, North Carolina-based author, Wiley Cash, who is also writer-in-residence at the University of North Carolina – Asheville, captures the fortitude of the everyday mill worker in his new novel, The Last Ballad.

The main setting is Gaston County, near Charlotte, in the 1920s, but the primary character Ella May Wiggins works in “the countless mills in both Carolinas.” When she arrives in Gaston County, described as running “on textiles,” there is another reference to the importance of the mills as a way of life for many Southerners: “Everyone across North Carolina, perhaps everyone in the South, knew this about the place that had come to be known as ‘the City of Spindles.’”

Ella May represents countless women of the time. Her parents died, she married young, immediately began having children, and was whisked away from her hometown by a husband who thought mill life would secure them. Yet, he decides that moonshine distribution and carousing are better for him than mill work, so she is left toiling grueling hours for a paltry income.

The Last Ballad’s omniscient narrator describes Ella May witnessing a gruesome machine accident at the mill; coming home exhausted only to care for sickly children watched daily by her 11-year-old and perpetually needing food, clothing, and other basics. But the main point of the story is Ella May’s courage to join the highly controversial National Textile Workers Union – considered communistic and anti-American by many (especially mill owners) at the time. Ella May desired a standard wage to get herself and her brood of four (and another on the way) out of poverty’s grasp.

Though relatively uneducated, Ella May understands innately the concept of fairness. She also recognizes condescension. She is a responsible, committed worker but occasionally has to ask for a shift off to tend to sickness suffered by one of her children. Her boss’s uncaring and unsympathetic attitude is the impetus she needs to challenge mill authority and way of life. She knows she could be fired for even thinking of joining a union, but union organizers are convincing.

The book gets its name from Ella May’s simple song, scrawled in pencil on a scrap of paper, about joining a union for the sake of children and their futures. When she is asked to deliver the song during the rally, she shrinks. But remembering her wage of $9 a week for six full work days, she reconsiders. What results is a beautiful ballad with convicting lyrics that not only spellbinds the audience, but garners media attention. She visited the rally to learn more about the union but instantly becomes the face of the union. “Ella’s senses awakened to the noise coming from the crowds: people cheered, whistled and pointed, called her name and chanted union slogans.”

The Last Ballad is both beautifully tragic and interestingly historic. It lauds mill workers from a bygone industrial era while at the same time spotlighting dynamics and conflicts between the weighty influence of paternal mill possessors and the sometimes overzealous ideals of union organizers.